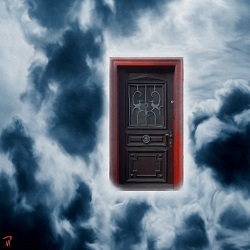 The owner of the mansion was walking towards the door, knife in hand. As he got closer to the door he could hear strange sounds. He opened the door; the man was performing a ritual with ornaments and strange smelling potions. The sorcerer man had boarded with the owner for three months now. He decided, for the sake of his family, that he had to get rid of the wizard man.

The sorcerer didn’t notice the owner until he was on top of him. The man, pointing the blade, threatened and motioned him to get in the small closet. He locked the door and left the room.

In the morning, the owner decided to go speak with the sorcerer. He went to the closet and started to deal with him, offering harmless release if he agreed to leave this day. But no sound was coming from the closet. He couldn’t hear anything having placed his head to the door. He unlocked the door and the wizard was gone! The small storage room offered nothing but darkness. He put his head inside to make sure this wasn’t a trick. Too late, he saw two hands reach for him out of the darkness. “I’m here” the darkness whispered. The closet door closed with the owner’s muffled scream.

It was a hot summer day in West Caster. James Stevens and his family were pulling into the long driveway of their recently purchased mansion. James had transferred to the nearby college from Boston. He was a skilled electrician and taught it well. The money he was making there was reasonable, but out here, he could afford a mansion.

In the rear seat, seven-year-old Alexander and eleven-year-old Jennifer were looking out the window. They were admiring the incredible amount of land they would have the pleasure of exploring. This land was infinitely large compared to the small land they owned in Boston.

Michelle was sitting at the front with her husband. She hadn’t seen the property either. She wasn’t too happy that she was leaving the city lifestyle at first, but it helped that she acquired the job of head nurse at the nearby hospital.

James slowly pulled in the driveway at the front entrance. Everyone quickly got out of the car, eager to explore the stately home. Alex and Jen were the first at the front door, pleading their father to hurry up with the key. The two children ran off in the house and then followed Michelle, looking around with big eyes.

Jen was in a hurry to see her new room. She quickly ran upstairs, followed by her brother, to survey the rooms. Her parents would have the biggest room, of course. She made sure to find the next bigger room on the floor and quickly claim it hers. Alex found his just between the bathroom and his parent’s room. There were two bigger rooms down the corridor but he didn’t want to be too far from his parents, especially in a new place.

After having the run of the house, James called everyone to the kitchen where he unpacked the meal they had brought with them. He knew they wouldn’t have time to stop at a market. After the late diner, everyone went upstairs to unpack the necessaries for the night. It was agreed that Alex could sleep with his parents for the first night, but Jen had no problem sleeping on her own across the hall.


Alain woke up trying to see the light of the day. He got out of the bed and went in the bathroom to wash himself up. After he took a shower, he went downstairs for breakfast. Michelle was already making their meal. He went and kissed her on the cheek, asking were the children were. She answered that the kids had already eaten and were playing outside, warned not to go far.


Outside, Jen and Alex were searching every nook and rock around the house. It took them to the centre of the garden. There, beautiful patterns of flowers decorated the ground, but some were dead. In the middle of the round pattern was a big rock. There was some kind of writing on it but most of it was erased. Jen moved as much weed as she could and tried reading the washed out lettering.

The rest was unreadable. It was certainly a tombstone. Jen had never seen a grave on a home property before. They headed back to the mansion and continued their exploration inside.


Later at noon, the movers arrived with boxes and furniture. While James and Michelle started emptying boxes after lunch, Jen and Alex made their way upstairs to continue with their exploration. They found the door to what they guessed went up to the attic, but it was locked.

In one of the rooms, Alex found another small door that was locked. He thought he heard something within and quickly backed away. Jen stepped from behind him, accusing him of being a coward, and found the door locked as well. She thought she saw movement in the keyhole and approached to get a closer look. When her face was nearly against the door, something banged on it from inside. Alex bounced up and ran crying downstairs. Jen was watching Alex run away when she heard the door open. She turned just in time to see two hands grab her out of the darkness.

Downstairs Alex ran to his mother. He was trying to breathe and talk at the same time while tears ran on his cheeks. Michelle calmed him down enough to understand that something was happening upstairs. She started to walk to the landing to the second floor when she saw Jen. “I’m here” Jen said with a smile. Michelle looked at Jen with a desperate sigh, thinking this was just another prank on Alex.

After telling Jen to behave and assuring Alex everything was alright, Michelle returned to unpacking in the living room.

Alex started back up the stairs to join his sister with the thought of asking her what happened. Before he reached the top, Jen took off. When Alex arrived on the second floor, he only got there in time to see Jen’s hand slide in the room. He questionably called out her name. “I’m here” was the only thing he thought he heard Jen replied.

Alex slowly made his way back into the room, first peering in to make sure the small door was closed. When he saw it was, he started looking around the room to find Jen. He called her name once again, but this time without reply. Surely she’s hiding to scare me again, he thought. Without getting too far from the room’s entrance, he knelt to see if she was hiding under the bed. There was a squeak and he turned, big eyed, to see the small door opening. Too late to run away, he felt his sister push him on his other side. Alex fell on the floor in the small closet as the door shut behind him, muffling any scream the little boy was trying to release. Jen stood in the room, alone with big smile on her face, whispering “I’m here”.


The little boy’s body was never to be found. In fact, no trace of the Stevens family was ever discovered. If it wasn’t for the movers, there would never have been any clues that they had arrived at all. It would be several days, after a few calls from Michelle’s mother, before someone showed up at the house. Inside, they found nothing. No boxes, no furniture, no trace of a family that was supposed to establish a life there.

The police checked the house only to find no indication of recent residents. With a final shout asking if anybody was in the house, they closed the front door and left.

Email ThisBlogThis!Share to TwitterShare to FacebookShare to Pinterest
Labels: story

Magic Ball logo (c) Marc Noël 2016
I may not post as often as I used to so feel free to browse my past collection with the links below.